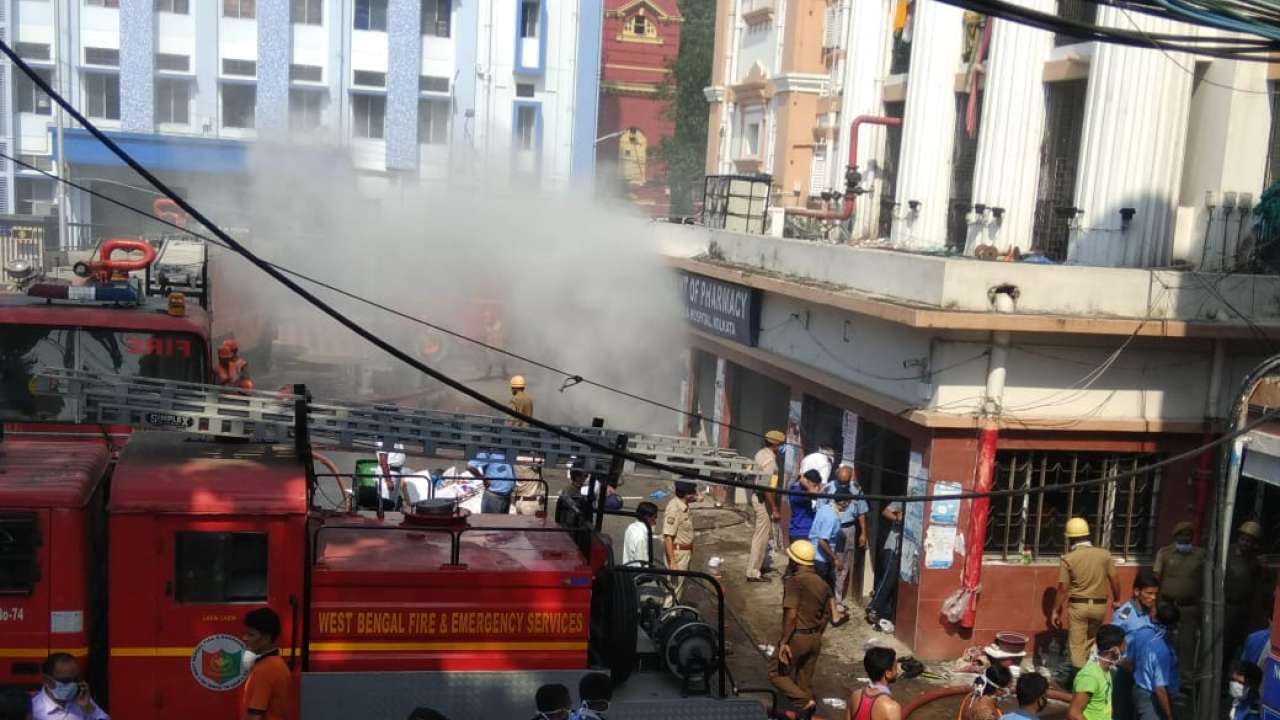 Kolkata, 3 October : A fire broke out at the Calcutta Medical College and Hospital here on Wednesday morning, which was brought under control after five hours even as authorities evacuated around 250 patients and claimed there were no casualties.

Panic gripped patients and their relatives alike as chaos prevailed due to the blaze that broke out at a medical store at the state-run hospital.

Some of the critically ill had to be carried out by hospital staff as enough number of stretchers were not available. Authorities said 250 patients were evacuated.

“I am a heart patient. I panicked on hearing of the fire,” a patient said.

“The moment I heard about the fire, we rushed out. But I have no idea when I will be able to take the patient inside as the doctors are unable to say anything,” a relative of another patient added.

A man claimed that his father, admitted for treatment of a respiratory problem, died after his condition deteriorated after inhaling smoke, though hospital authorities said no death occurred due to the blaze.

West Bengal Minister Sovan Chatterjee said all patients in the affected building were shifted to other wards as the fire, though controlled, continued to burn.

“The blaze broke out on the ground floor of the hospital building around 7.58 a.m. Ten fire tenders were pressed into service. The situation is now under control,” said Jag Mohan, Director General, West Bengal Fire and Emergency Services.

“The fire started at a place where gas cylinders, gauzes and bandages are stored. We have identified the source of fire and are working accordingly. We are using extractors to remove smoke from the building. The firefighters are in control of the situation,” Mohan said.

Forensic experts collected samples from the building in the afternoon.

Earlier, thick smoke was seen coming out from the old hospital building that houses the Cardiology, Hematology and Endocrinology departments.

“Medicine stocks costing Rs 5 crore were destroyed,” said the incharge of the pharmacy housed in the damaged building.

Minister of State for Health and Family Welfare Chandrima Bhattacharya assured that the stocks of lifesaving medicines destroyed in the fire will be replaced.

A son of deceased Shaidul Islam Mullick, a resident of Hoogly district’s Khanakul, said his father was admitted to the hospital last week.

“My father was suffering from respiratory problems. He was stable in the morning. But he had to be rushed out of the ward after the fire broke out. His condition deteriorated as he inhaled a lot of smoke. The doctors took him to the Emergency Ward but he passed away around 10 a.m.,” he claimed.

Medical College Superintendent Asish Kumar Basu, however, told IANS: “All patients were safely evacuated. No patient was injured or fell ill during the shifting. The process of returning the patients to their respective ward has already started. We have to check the case of this person’s death. According to the doctors, his condition was critical before the fire.”

New Delhi, 8 Nov : Congress leader Navjot Singh Sidhu has been allowed by the government to accompany the Sikh ‘jatha’ that will travel to Darbar Sahib Gurudwara in Pakistan via the Kartarpur Corridor on November 9, sources said here on Thursday.

The Ministry of External Affairs has, however, denied Sidhu, a former state minister in Punjab, the permission to travel to Pakistan via Wagah. Pakistan had extended Sidhu the first invitation for the event and had even offered him a visa.

The ‘jatha’ will travel to Darbar Sahib Gurudwara, a holy shrine of the Sikh religious community in Pakistan, using the corridor which will be thrown open for the first time on November 9.

Sidhu had written to the External Affairs Minister S. Jaishankar seeking permission to travel to the holy shrine via Attari-Wagah, which would require Pakistan visa. He wrote that if he didn’t “get response to his third letter seeking permission to visit Pakistan, then he will proceed as a devotee on an eligible visa”.

Bonanza for stock markets in the works; DDT to be scrapped