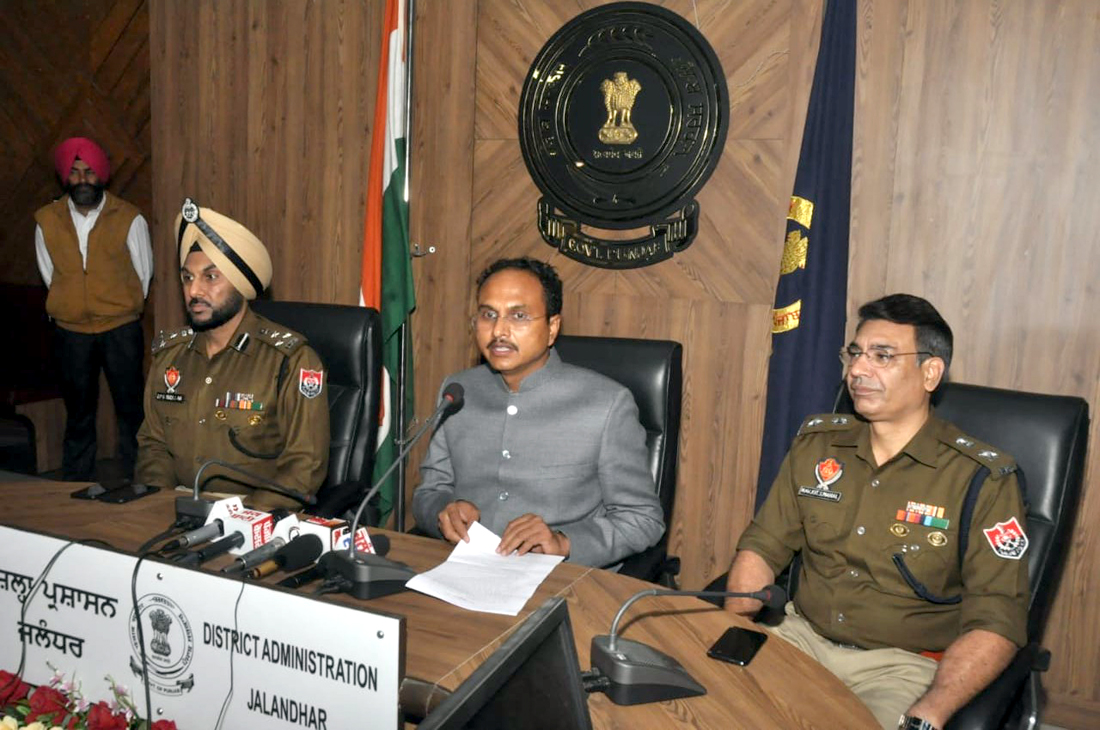 Jalandhar, March 21 : In order to prevent the spread of Corona Virus in the district, the Jalandhar administration has decided to enforce a lockdown for restriction of movement and gathering in the district.

Announcing this Deputy Commissioner Jalandhar Mr Varinder Kumar Sharma, Commissioner of Police Mr Gurpreet Singh Bhullar and Senior Superintendent of Police said that the lockdown would be enforced from 7 am on Sunday (March 22) till midnight on Wednesday (March 25). They said that during the lockdown all the commercial establishments in the district except few categories of exempted ones, which were required for the larger public interest, would be closed. The officers said that the takers of essential services and the providers of these services would be allowed to move with riders.

The Deputy Commissioner, Commissioner of Police and Senior Superintendent of Police said that no one would be allowed to loiter and severest of severe action would be taken against them. They said that the committees of the civil and Police officers have been constituted to enforce this effectively. The officers further said that movement of vehicles in, outside and within the city would be restricted to emergency vehicles.

The Deputy Commissioner, Commissioner of Police and Senior Superintendent of Police categorically said that only one person from a family would be allowed to move out for availing the essential services. They said that the movement would be restricted in Jalandhar as per the powers vested through the Epidemic Act. The officers said that every step would be taken to restrict gathering and movement in the district. 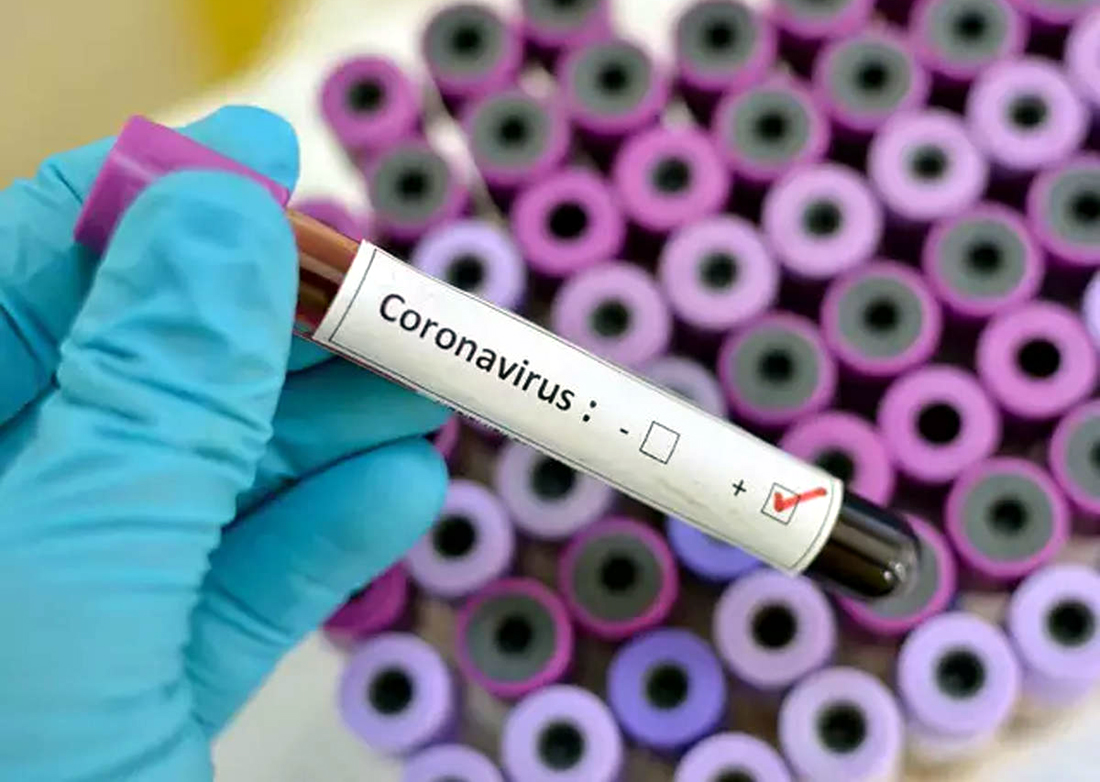 Jalandhar, 24 March : Three family members have been tested positive for coronavirus in Phillaur, Jalandhar, on Tuesday. Meanwhile, the total number of coronavirus cases in Punjab has increased to 26. Earlier on Monday, two cases were reported, one each from Mohali and Nawanshahr.

Punjab has reported one death so far. He was identified as Baldev Singh, who died of heart attack in Banga Civil hospital, later tested positive. He contracted his family with the pandemic and seven other individuals. 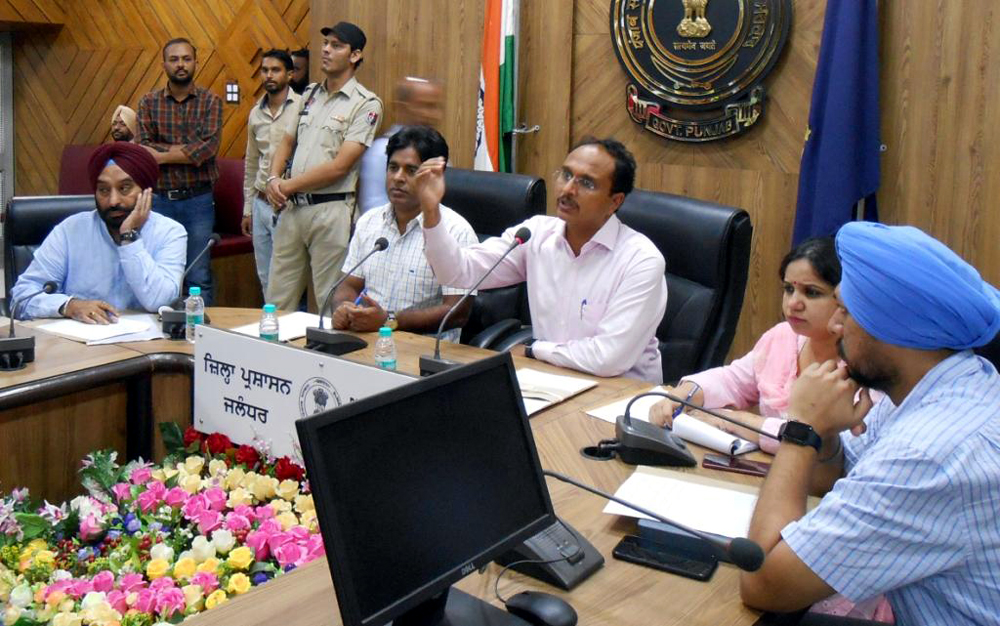 Chairing a meeting here with the college managements, students and officers of civil administration at the District Administrative Complex, the Deputy Commissioner said that debarring any student from sitting in exam or withholding his degree on name of Post Matric Scholarship scheme would not be tolerated at any cost. He said that the scheme has been initiated to enable the students of weaker and underprivileged sections for getting higher education, so that they could become active partners in socio-economic growth of the country. Mr. Sharma said that any sort of undue harassment of the poor students on pretext of this scheme was completed undesirable and unwarranted.

The Deputy Commissioner categorically said that the state government was fully committed to implement this scheme in the right earnest with the active support of the Educational institutions. He said that the colleges would get every single penny earmarked to the students availing the scheme, so that they do not face any sort of burden. However, Mr. Sharma said that colleges should implement the scheme in right letter and spirit so that maximum students could get its benefit.

Meanwhile, Deputy Director of the Social Welfare Department Mr. Parminder Singh Gill who specially attended the meeting apprised the colleges that the department has opened the Portal for educational institutions under the scheme. He said that the portal for registration of students would also be operational within a week. Mr. Gill said that the colleges and Educational Institutions must follow the instructions issued by the state government for the correct implementation of the scheme. 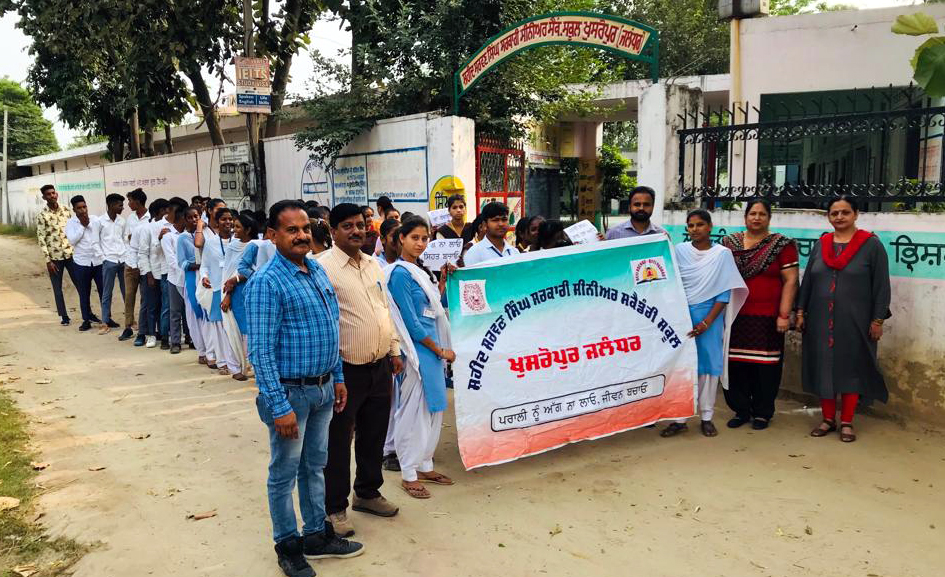 Jalandhar, 18 Oct (live24india): The students of schools from rural areas across the Jalandhar today became the ‘ambassadors of anti-stubble burning campaign’ of the Punjab government by touching the streets to sensitize the people about need of conserving the environment by not burning the paddy straw.

Thousands of students studying in the schools in rural areas participated in the anti-stubble burning rallies organized in their respective schools to disseminate the message of clean, green and pollution free Punjab. The move was a part of Punjab Chief Minister Captain Amarinder Singh led state government’s historic initiative to minimize the incidence of paddy straw burning in the state. Thousands of students carrying placards and banners regarding the harmful effects of paddy straw burning made the people aware of the need for not burning the paddy stubble.

The historic initiative was taken by the state government to involve students of schools across district to make a valuable contribution in bringing awareness amongst farmers against the menace of stubble burning.

The students of primary, middle, high and senior secondary schools in the rural areas, both in government sector and private sector, participated in the one of its kind awareness rallies held today from 9 am to 10 am to create awareness against unhealthy practice of stubble burning. During these rallies Students were apprised about the damage caused by stubble burning to the soil health and the environment.

The rallies focused on creating awareness amongst farmers to preserve the fertility of soil by not indulging in this hazardous practice on one hand and making our state clean, green and pollution free on the other.

The awareness campaign launched by the students today was a path breaking initiative as it would be instrumental in educating the farmers for conservation of natural resources i.e. air, water and soil to ensure ecological balance. The students were also educated to stop the use of fire crackers in the ensuing Diwali thereby effectively disseminating the message of Sri Guru Nanak Dev Ji for conservation of nature in wake of the 550th Parkash Purb Celebrations of the first Sikh Guru.