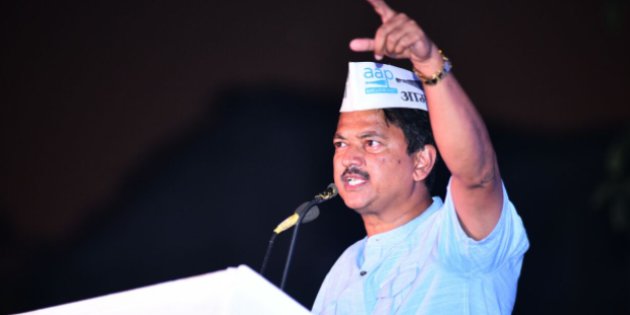 Panaji, 26 Dec 2016 : Thed Anti-Corruption Bureau of Goa grilled AAP’s chief ministerial candidate Elvis Gomes on Monday over an alleged land scam that took place when he was working with the state government.

Emerging from the two-hour interrogation session, Gomes, who also heads the Aam Aadmi Party in Goa, denied he was linked to the scam.

He alleged that he was being harassed by the Bharatiya Janata Party (BJP) government because of the “rapid” strides the AAP was making in Goa, where polls to the legislative assembly are likely to be held early next year.

“I have responded in detail to the questions asked by the ACB during the interrogation… This matter has nothing to do with me. This is nothing but sheer harassment,” Gomes said.

He said calling him, a Catholic, for interrogation on the Boxing Day (the day after Christmas celebrations) also amounted to targeted harassment.

Several hundred AAP volunteers were present outside the ACB office, shouting slogans against the BJP-led state government, as Gomes was being inetrrogated at the agency’s Panaji office.

Gomes and former Housing Minister in the Congress-Nationalist Congress Party government Nilkanth Halarnkar were booked under Sections 420 (cheating) and 120-B (criminal conspiracy) in February this year. Gomes was then a serving bureaucrat.

The duo has been accused of scrapping official acquisition procedure for a chunk of land measuring 30,256 sq mts in Margao in South Goa district in 2011, after initially acquiring it for a housing colony.

They have also been accused of altering the land’s zoning from orchard area to settlement area before handing it back to the original owner, thereby automatically increasing its market value.

Gomes has contended that he was not even in office when the land acquisition was formally dropped by the concerned ministry, and said it is only the rise of the AAP in Goa that has rattled the ruling dispensation.

“The AAP is making such rapid progress in India. That is what is rattling them (the BJP). We are on a course that will help Goa in the future,” he said.

Earlier in Delhi, Chief Minister Arvind Kejriwal accused the BJP of “victimising” one who “is known all over Goa for his honesty”.

“People of Goa will give a befitting reply to the BJP” in the state assembly polls next year, Kejriwal tweeted, adding “Goa will vote for honesty”.