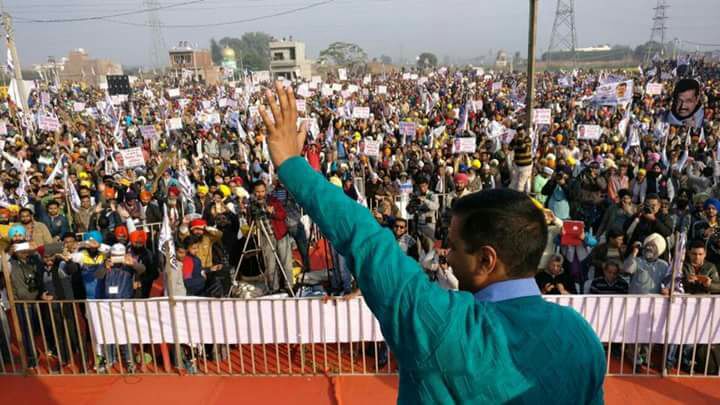 Why Captain Amarinder, Badals and Majithia have never challenged each other to contest from their respective constituencies? MAJITHA, 14 Dec 2016 : National Convener of Aam Aadmi Party (AAP) and Delhi Chief Minister Arvind Kejriwal today announced Himmat Singh Shergill as the party candidate to take on Punjab Revenue Minister Bikram Singh Majithia, who has been mired under various controversies pertaining to drug and narcotics spread in Punjab.
Kejriwal, while challenging Majithia on his home turf, proposed the name of Legal Cell Head of the party Himmat Singh Shergill before massive gathering asking them if the latter would the right choice of the party to take on Punjab Revenue Minister Bikram Majithia. The people, who came in large number immediately got up to break in thunderous applause cheers and clapping only to give their positive nod to Kejriwal’s proposal.
National Convener of AAP also posed the same query to Shergill, who was standing close by, if he was ready to take the challenge, Shergill said that he was more than eager to accept the challenge for the sake of Punjab and to take the state out of the clutches of Badals and Majtihia. Shergill said that ever since he has joined the party, he was ready to accept any duty given by the party to save Punjab and its people from the Mafia’s rule of Badals and Majithia. Crowd once again broke into the loud applause and started dancing when they saw Shergil happily accepted the challenge.
Kejriwal said that it is extremely important to root out Captain Amarinder, Badals and Majithia from Punjab, if people here wanted to give Punjab a chance of hope, progress and development.
“With the massive number of people, who have gathered in Majitha from all across the state, I can see that we have all gathered here to uproot Majithia from his own constituency to establish the rule of law. The Kind of massive gathering I see around this place gives me a sense that Majithia would even forfeit his deposit in 2017 assembly polls from this constituency”, Kejriwal said.
Delhi Chief Minister said the whole Punjab knew that Captain Amarinder, Badals and Majithia are fighting 2017 assembly polls together as part of grand alliance against Aam Aadmi Party (AAP).
“Otherwise, why Majithia has never challenged his uncle Captain Amarinder to contest against him from Majithia. Similarly why uncle Amarinder has never challenged Majithia or Badals to contest against him from Patiala”, Kejriwal said adding that at the same time even Chief Minister Parkash Singh Badal and Deputy Chief Minister Sukhbir Badal have never challenged Amarinder to contest from their constituencies of Lambi and Jalalabad respectively. “But all of them will always challenge me to contest against them. This shows Badals and Captain Amarinder are having secret political understanding to protect each others’ interests and both Akalis and Congress are jointly contesting against AAP”, Kejriwal said.
Kejriwal also warned the people to watch out for the weak candidates both parties would field against Captain Amarinder, Badals and Majithia in order to give them walkover in assembly polls.
National Convener of AAP also assured people of Punjab that once AAP came into power it would punish the preparators, who indulged in desecration of Guru Granth Sahib at Bergadi by handing out exemplary punishment so that no one dare to do this again in Punjab.
Prominent among others, who were present on the dais include Gurpreet Singh Waraich, Bhagwant Mann, Sanjay Singh, Jarnail Singh, Kanwar Sandhu, Sukhpal Khaira and Simarjit Singh Bains.