“Kartarpur Sahib da langah khulwaon vale asli hero. Assi Punjabi hik te thok ke kehne han…. (The real heroes behind the Kartarpur corridor. We, Punjabis, admit that the credit goes to Navjot Singh Sidhu and Imran Khan),” read one of the hoardings that appeared.However, the Municipal Corporation removed the hoardings within hours of their appearance, officials said on Wednesday. 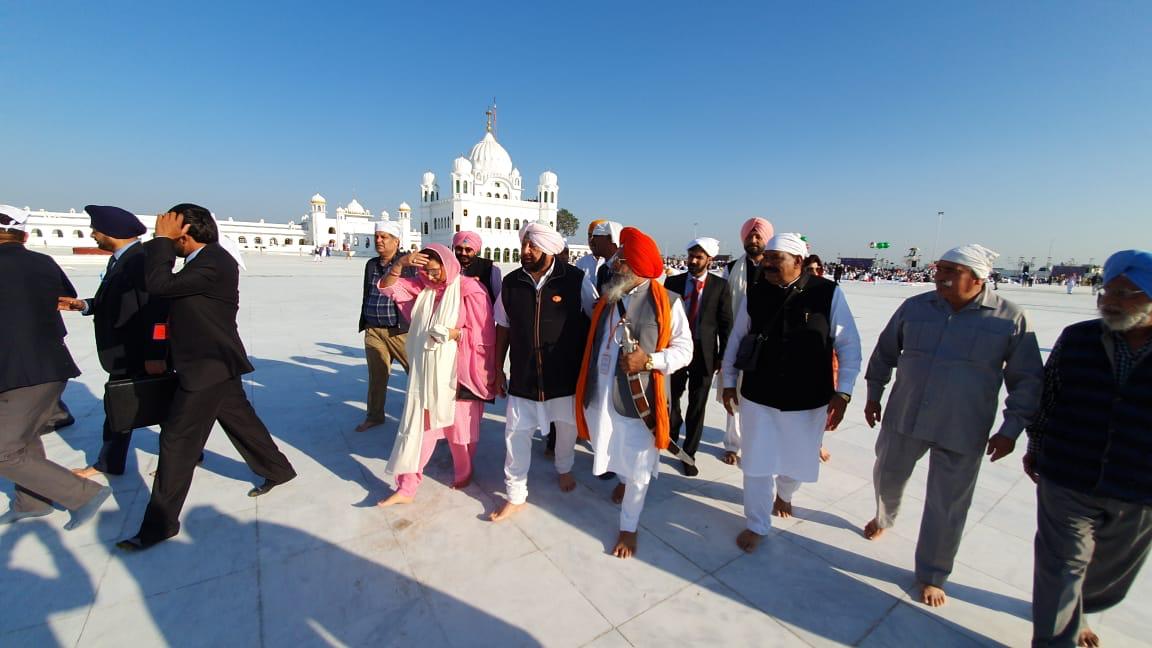 Dr. MANMOHAN SINGH ALONG WITH HIS WIFE ALSO PAID OBESIANCE

KARTARPUR (PAKISTAN), 9 NOVEMBER (live24india): Punjab Chief Minister Captain Amarinder Singh on Saturday said that the opening of Kartarpur Corridor as a part of 550th Prakash Purb Celebrations of Sri Guru Nanak Dev Ji would prove to be a beginning of peace and goodwill between the both countries

Terming the opening of corridor as a red letter day, the Chief Minister further said that this corridor would also be instrumental in disseminating the message of love, peace and brotherhood as preached by Sri Guru Nanak Dev Ji besides strengthening our mutual ties.

While talking to the media persons on his arrival at Pakistani Immigration Terminal at Kartarpur, the Chief Minister further said that he was overwhelmed to be a part of first Jatha as a humble devotee because the demand of Khule Darshan-didar of Gurdwara Sri Darbar Sahib, Kartarpur had been fulfilled after a long period of over 70-years.

Answering another query, the Chief Minister said that everyone especially the Sikh community was extremely delighted over this development and hoped that several more Gurdwaras in Pakistan would also be opened for devotees in the near future following the opening of Kartarpur corridor, from which the sangat had been deprived of open access (khulke darshan didar) to these holy places.

Earlier, the Prime Minister of Pakistan Imran Khan personally came to receive the first Jatha including the former Prime Minister Dr. Manmohan Singh, his wife Gursharan Kaur and other dignitaries, which was led by Captain Amarinder Singh as humble Sikh at Immigration Terminal and accompanied the delegation in a special bus to Gurdwara Sri Darbar Sahib.

Immediately on Captain Amarinder’s arrival at Immigration Terminal, the Pakistani Foreign Minister Shah Mahmood Quereshi welcomed the former where the Chief Minister described the opening of terminal as historic day and both introduced their family members to each other. The Chief Minister on having his sister Heminder Kaur the wife of former External Affairs Minister Natwar Singh introduced to the Pakistani Minister, Qureshi retorted, “who does not know Natwar Singh as he was a famous and one of the most respected personalities.”

Later, the Chief Minister accompanied by his wife and Patiala Member Parliament Preneet Kaur and other family members paid obeisance at the sanctum-Sanctorum of the Gurdwara Sri Darbar Sahib, Kartarpur and offered prayers for overall development, peace and prosperity of Punjab.