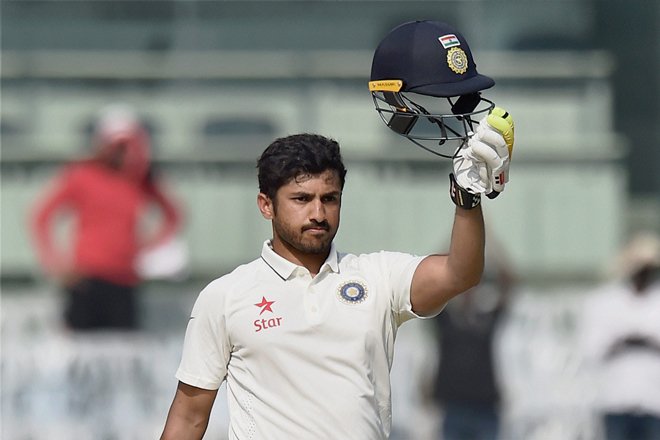 Chennai, 19 Dec 2016 :  Middle-order batsman Karun Nair became the second Indian cricketer after Virender Sehwag to score a triple century in a Test innings, achieving the feat on the fourth day of the fifth match against England here on Monday.

The right-hander remained undefeated at 303 at stumps, reaching the landmark in the 191st over of India’s first innings at the M.A. Chidambaram Stadium here.

Nair reached the milestone off the bowling of leg-spinner Adil Rashid when a misfield at point resulted a boundary that brought up his triple-hundred, thereby helping Nair become the first Indian to turn his maiden hundred into a triple. Nair became the third highest individual scorer by an Indian in Tests, after Sehwag, who heads the top scorer’s list with two triple centuries.

Sehwag scored 319 against South Africa here in Chennai in March 2008 and 309 vs Pakistan in March-April 2004 at Multan in Pakistan.

After India’s declaration, the Karnataka batsman walked off the field to delirious applause. England players also shook hand with him, acknowledging the enormity of his feat.

Nair’s marathon knock also helped India post their highest score in a Test innings, surpassing the mark of 726/9 declared against Sri Lanka in 2009 at Mumbai.

The 25-year-old was third on the highest maiden hundred in Tests after the West Indies’ Gary Sobers (365 not out) against Pakistan in 1958 and Australia’s Bob Simpson (311) vs England in 1964.