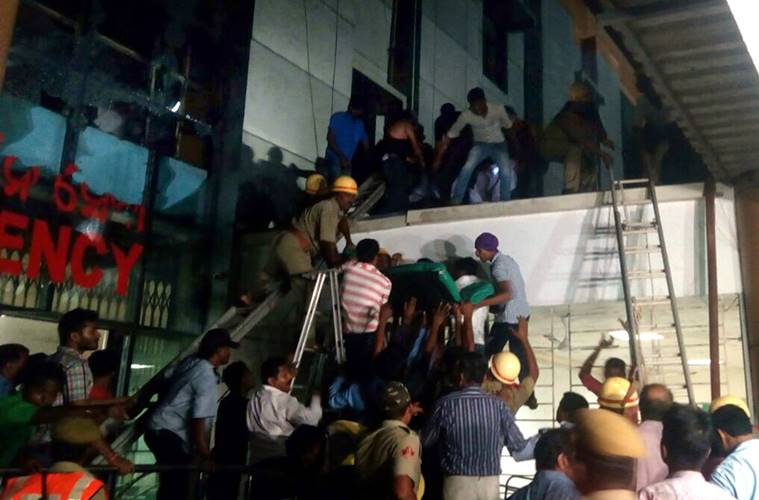 Narendra Modi Twitter :  Deeply anguished by the loss of lives in the hospital fire in Odisha. The tragedy is mind-numbing. My thoughts are with bereaved families. Bhubaneswar/New Delhi, Oct 18 : At least 22 persons were killed and several injured after a major fire broke out in the Institute of Medical Sciences and SUM Hospital in Bhubaneswar on Monday evening.

While the government-run Capital Hospital’s officials confirmed receiving 14 bodies, eight bodies were received by the AMRI Hospital in Bhubaneswar.

Over 50 patients were rescued from the dialysis ward and the adjoining Intensive Care Unit, the officials said.

The rescued patients were shifted to All India Institute of Medical Sciences in Bhubaneswar and other hospitals, said Health Minister Atanu Sabyasachi Nayak.

He said he can’t confirm the exact death toll.

“Deeply anguished by the loss of lives in the hospital fire in Odisha. The tragedy is mind-numbing. My thoughts are with bereaved families,” he tweeted.

Odisha Health Secretary Arti Ahuja said: “I can’t tell the exact death figure at this moment. But, some hospitals have received dead patients from SUM Hospital. We are presently focusing on patient care and rescue operation.”

She said an inquiry committee has been constituted to inquire into the fire and whether the hospital authorities had taken safety measures or not.

The probe team comprises the Khurda Collector, Director of Medical Education and Training and the District Fire Officer, she added.

The cause of the fire is said to be an electrical short-circuit. The fire broke out in the intensive care unit (ICU) of dialysis ward of the hospital, said sources.

About seven fire tenders have been pressed into service to douse the fire.

“Rescuing the patients and those present in the hospital is our priority. We are yet to assess the damage and ascertain the source of the fire,” Behera said.

Modi said he spoke to Union Health Minister J.P. Nadda and asked him to facilitate transfer of all the injured to All India Institute of Medical Sciences in Bhubaneswar. “Hope the injured recover quickly,” Modi said.

Nadda tweeted: “Deeply saddened by the fire incident in Institute of Medical Sciences and SUM Hospital, Bhubaneswar. My condolences rest with the bereaved families.”

Related Topics:BhubaneswarFireSUM hospital
Up Next