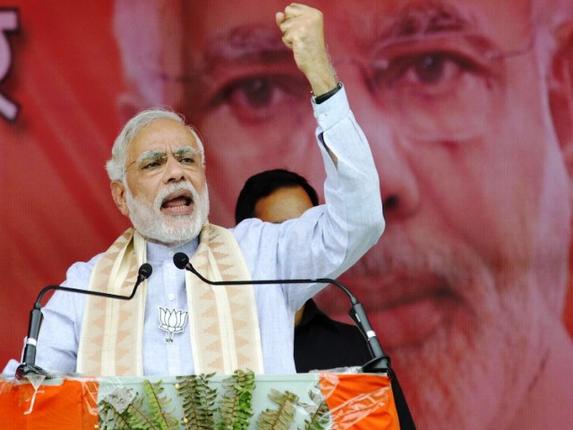 Mahoba (Uttar Pradesh), Oct 24 : Amid the escalating crisis in the ruling Samajwadi Party (SP) in Uttar Pradesh, Prime Minister Narendra Modi on Monday said given a chance, the BJP will change the face of the state and usher in its development and prosperity. Addressing an impressive gathering in Mahoba district of Bundelkhand, Modi said while the ruling party and others were fighting over power, the Bharatiya Janata Party (BJP) was worried about the state.

He said that lack of governance has aggravated things in the drought-hit Bundelkhand. “We have sent large amounts of funds for this region but, sadly, work has not been done,” Modi said.

He cited the work done in Gujarat as its chief minister and pointed out that after 15 years of hard work, the drought-hit areas were now plush with water.

The Prime Minister also batted for river linking and reminded the gathering that long back, former Prime Minister Atal Bihari Vajpayee had envisaged this and his government was taking it forward now.

Alleging “behind the doors friendship” between the ruling Samajwadi Party and Mayawati-led Bahujan Samaj Party, Modi called upon the people to break out of the “SP-BSP stranglehold”. He urged the people to vote for the BJP for all-round development of the state.

“Sometimes SP, other times BSP, their world continued but your world remained unchanged. If you want to transform Uttar Pradesh into Uttam Pradesh in the coming 10 years, then come out of this SP-BSP stranglehold,” said Modi.

Attacking both the SP and the BSP which have been in power in the state alternatively, Modi said these parties target each other publicly but were friends behind the curtains.