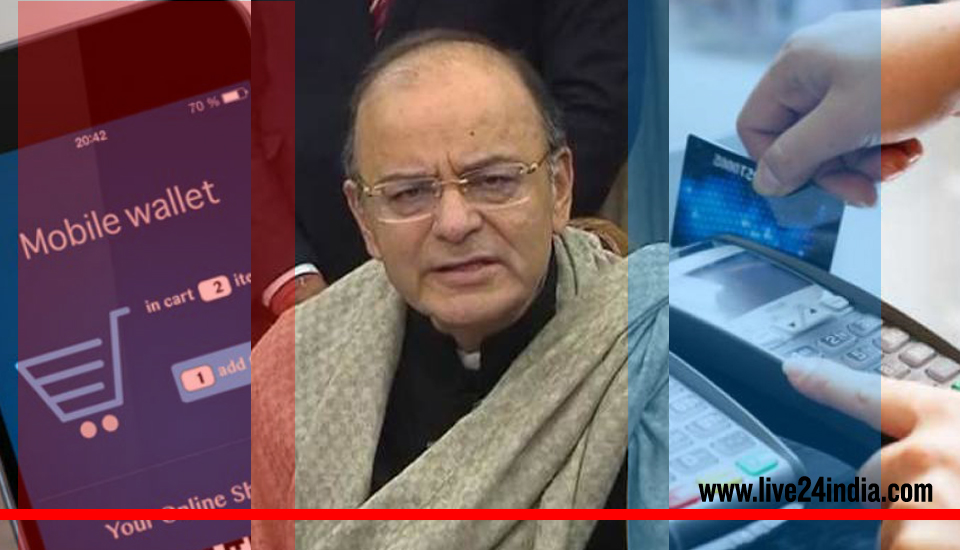 New Delhi, 8 Dec 2016 :   Admitting that there are visible and hidden costs in reducing cash volume in the economy, the government on Thursday announced a series of eleven measures designed to increase the pace of digital payments to usher in a cashless economy. Among the measures, payment by card for petrol and diesel will enjoy a discount of 0.75 per cent, Finance Minister Arun Jaitley told reporters here.

He said that in one month since the demonetisation of high value currency on November 8, the percentage of digital payments at petrol vends has gone up from 20 per cent to 40 per cent.

Customers will get a higher discount on digital payment as all central undertakings will ensure that the transaction fee and merchant discount rate (MDR) charges are waived on such payments, Jaitley said.

Suburban railway monthly and season tickets bought through digital payment will get a 0.5 per cent discount, effective from January 1, 2017, beginning with the Mumbai suburban railway network. “As more and more passengers will shift to digital means the cash requirement may get reduced by Rs 1,000 crore per year in near future.”

“All passengers who buy ticket online will get free insurance cover worth Rs 10 lakh,” Jaitley said.

The minister elaborated that nearly 14 lakh railway passengers buy railway tickets daily — out of which 58 per cent tickets are bought online.

“It is expected that another 20% passengers may shift to digital payment methods of buying railway tickets. Hence, nearly 11 lakh passengers per day will be covered under the accidental insurance scheme,” he said.

The minister revealed that railways give a discount of five per cent for payment of services like catering, accommodation, retiring rooms through its affiliated entities, corporations to passengers. The public sector banks are advised to charge only Rs 100 per month as monthly rental from merchants for PoS (point of sale) terminals, micro ATMs, mobile POS to bring small merchants on board the digital payment eco-system, Jaitley said.

“Nearly 6.5 lakh machines by public sector banks have been issued to merchants who will be benefited by the lower rentals and promote digital transactions,” the minister said.

“With lower rentals, more merchants will install such machines and promote digital transactions.”

Besides, no service tax will be charged on digital transaction charges or MDR for transactions up to Rs 2,000 per transaction.

The minister informed that payments made for toll charges on the national highways using RFID (Radio-frequency identification) card or Fast Tags will entail a discount of 10 per cent for the year 2016-17. “The central government through NABARD (National Bank for Agriculture and Rural Development) will extend financial support to eligible banks for deployment of 2 POS devices each in one lakh villages with population of less than 10,000,” the minister pointed out.

“This will benefit farmers of one lakh villages covering a total population of nearly 75 crore who will have facility to transact cashlessly in their villages for their agri needs.”