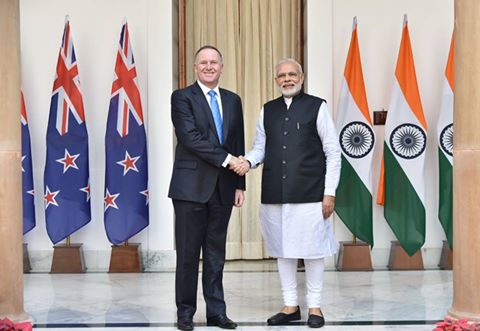 A joint statement, released after a meeting between Prime Minster Narendra Modi and visiting New Zealand Premier John Key, said that the two leaders agreed to enhance cooperation to combat the full spectrum of terrorist threats in all their forms and manifestations.

“They called for eliminating terrorist safe havens and infrastructure, disrupting terrorist networks and their financing, and stopping cross-border terrorism,” the statement said. India has been accusing Pakistan of supporting cross-border terrorism. Relations between the two neighbouring countries have got strained following terror attack on an army camp in Uri town of Jammu and Kashmir last month. India later conducted surgical strikes on terror launch pads across the Line of Control.

The joint statement called for the early adoption of the Comprehensive Convention on International Terrorism to strengthen the international counter-terrorism legal framework.

Modi and Key underlined that India and New Zealand were both maritime nations with a strong interest in the Asia-Pacific and Indo-Pacific regions being stable and prosperous, including by ensuring the safety and security of sea lanes and freedom of navigation.

The two countries agreed to establish a bilateral ministerial dialogue through annual meetings, in either country or on the margins of regional or global gatherings.

They also agreed to hold annual foreign ministry consultations at the level of senior officials, promote cooperation between the two countries on cyber issues and continue negotiations for a Customs Cooperation Arrangement.

The two prime ministers called for reform of the UN Security Council with New Zealand reiterating its support for India’s membership in a reformed council, including in any expansion of permanent membership.

Key, who is on a three-day visit to India, said his country would continue to contribute constructively to the process currently underway in the NSG to consider India’s membership.

“New Zealand is committed to working with NSG members to reach a decision as soon as possible,” the statement said, adding India stressed that NSG membership would provide the predictability necessary for meeting its clean energy goals in the context of the Paris climate change agreements.

The outcomes during Key’s visit included an arrangement regarding food safety cooperation and third Protocol to the Convention for avoidance of double taxation and prevention of fiscal evasion.

On trade, the two prime ministers agreed that the relationship between the two countries was strong with two-way trade now worth $1.8 billion in goods & services annually, which was an increase of 42 percent in the past five years.

New Zealand said it would work towards promotion of Foreign Direct Investment in India in support of Make in India campaign and development objectives. There will be greater involvement by New Zealand’s scientific and commercial entities in Swachh Bharat, including the Clean Ganga initiative, the statement said.

Union Budget to be presented one month in advance: PM