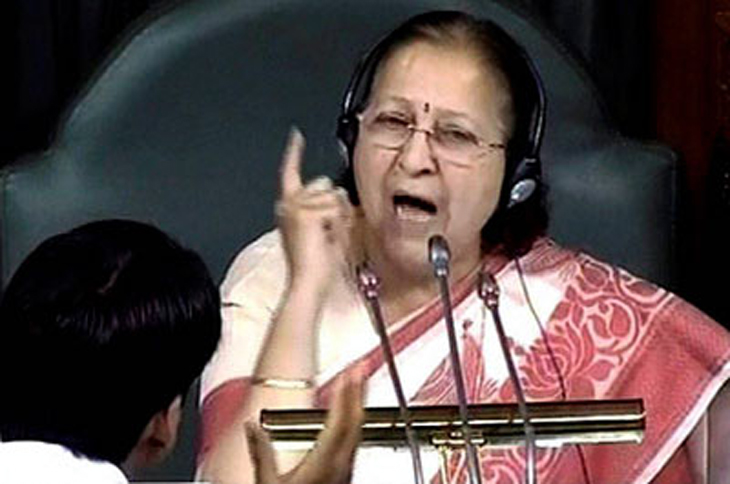 New Delhi, 1 Dec 2016 : The opposition on Thursday again disrupted Lok Sabha proceedings persistently demanding a discussion on demonetisation under a rule that entails voting, forcing Speaker Sumitra Mahajan to adjourn the house for the day shortly after noon.

The TMC leader said the aircraft circled overhead for about 30 minutes and alleged that the Air Traffic Control delayed giving the landing permission even though the pilot pointed out that the plane was running out of fuel.

Leader of the Congress in the Lok Sabha, Mallikarjun Kharge, said Banerjee’s life was in danger as she was travelling from Kolkata to Patna and Lucknow and holding rallies against the November 8 demonetisation.

Union Civil Aviation Minister Ashok Gajapati Raju, however, denied the charge, saying the flight hovered for only 13 minutes before it landed at the airport.

Raju said the Director General of Civil Aviation (DGCA) had ordered an inquiry.

Soon after, the opposition, led by the Congress and the TMC, trooped near the Speaker’s podium to demand the discussion on demonetisation as Speaker Sumitra Mahajan tried to conduct the Question Hour amid the din.

Members of the Left parties, the Samajwadi Party, the Nationalist Congress Party and the Rashtriya Janata Dal stood in the aisles in solidarity with the other opposition members.

However, the opposition continued with its tirade against the government, after which Mahajan adjourned the house till noon.

When the House reassembled, Mahajan disallowed all notices of adjournment motion on different issues.

Kharge, supported by Bandopadhyay, demanded discussion under any rule which entails voting.

“This is a big scandal. It’s a scam. People are not getting their salaries. There is complete chaos. We want to discuss the issue while the government is running away from discussion,” Kharge said.

“A ratio has been fixed to convert the black money into white; so black money hoarders are facing no problems but the common man is facing hardship,” he said and urged the Speaker to convince the treasury benches for the discussion under voting rule.

He raised the issue of hacking of Congress Vice-President Rahul Gandhi’s Twitter account and expressed his concern.

To this, Parliamentary Affairs Minister H.N. Ananth Kumar said the government was ready to discuss the matter. Mahajan also urged the members to begin the discussion, keeping aside the rules.

However, the opposition did not relent and shouted “we want voting, we want voting”, to which the treasury benches countered by shouting “Modi, Modi, Modi”.

Amid the din, Mahajan adjourned the House for the day.

The Lok Sabha has experienced a virtual washout since the winter session of Parliament began on November 16 as the government and the opposition have locked horns over demonetisation and the consequent cash crunch faced by the people.

Related Topics:DemonetisationLok Sabha
Up Next

Rajya Sabha adjourned for the day amid ruckus over demonetisation