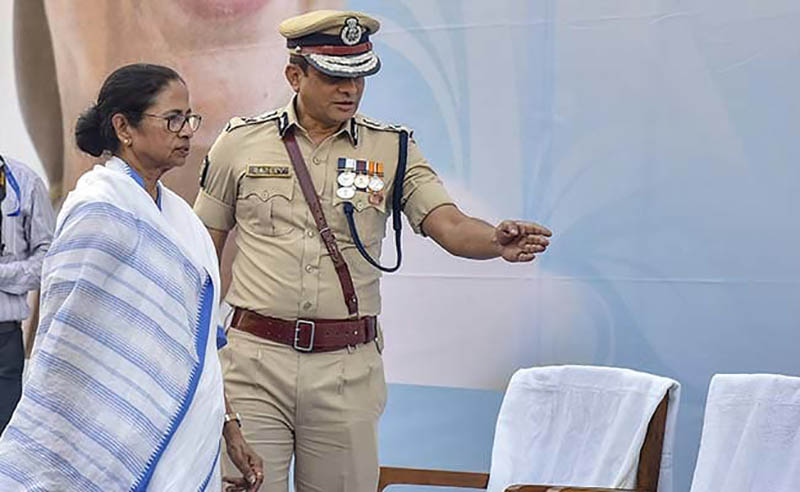 Kolkata, 05 February 2019 : West Bengal Chief Minister Mamata Banerjee on Tuesday welcomed the Supreme Court verdict in a CBI plea against Kolkata Police chief Rajeev Kumar and described the order to the CBI not to arrest him a “moral victory”.

The apex court directed Kumar to appear before the Central Bureau of Investigation (CBI) in connection with the Saradha cheat fund case at a “mutual place” and asked the agency not to take any coercive action against the officer, including arrest.

“It is our moral victory. We said we have full respect for the judiciary and institutions,” Banerjee told the media from the dais of her sit-in protest here.

“This order was passed earlier also that they can talk mutually in a mutual place. We are grateful for the verdict.

“Rajeev Kumar never said he would not cooperate. He gave five letters to the CBI asking the officials to meet him at a mutual place but they went to his house to arrest him in a secret operation.

“Today the court said no arrest… We welcome the verdict. It will strengthen the morale of the officials,” Banerjee said.

Asked if her sit-in protest will continue after the court verdict, Banerjee said she would take a decision after talking to other opposition leaders.

“I don’t go alone. We are not alone. I will consult the main opposition leaders of all the parties who extended their support to us,” the Trinamool Congress supremo said.

“Our case is very strong. We never said we will not co-operate. The even questioned my office staff by going to his residence as he is a 72-year-old person,” she said.

“If you see that the central agencies are coming to arrest the state officials vindictively without any prior notice to the state government, don’t you think it will violate the constitutional obligation as law and order is a state subject?” She questioned.

Banerjee said the CBI cannot enter any house and arrest whoever they want to.

“In India no one is the ‘Bigg Boss’ of the country except the people and the Constitution,” she declared to cheers from her supporters.

“Why is the CBI calling people and arresting them? You cannot fight them after the arrest for four months as you are not allowed to go to any other court except the CBI court. So where will people get justice?”-