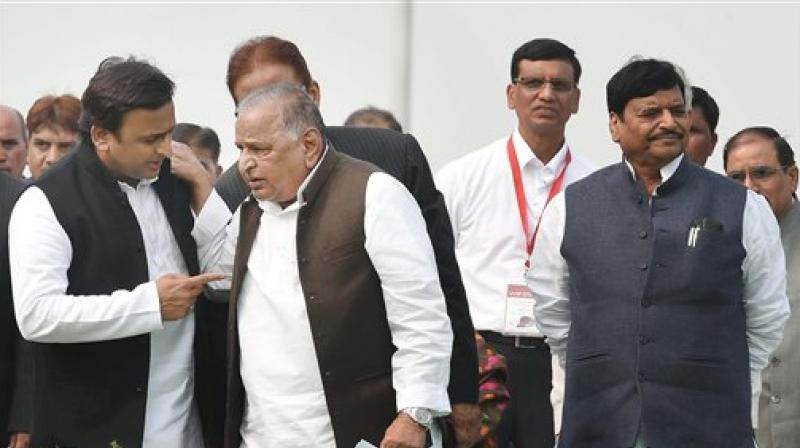 Addressing a press conference, also attended by his brother Shivpal Yadav, Mulayam said, “To save the party, we have expelled both Ram Gopal and Akhilesh Yadav for six years from the party.”

“Akhilesh doesn’t understand, Ram Gopal is trying to weaken him. I have worked really hard to make this party, what was their role in this? I work hard and they reap the fruits,” Mulayam said.

Mulayam had also called a meeting of all candidates named by him for the Uttar Pradesh elections on Saturday morning. He said that by releasing a separate list of candidates for the UP polls, Akhilesh had blown the mutinous bugle and thus had to be sacked. He also said that Akhilesh’s uncle, Ram Gopal Yadav, was ruining the future of the UP chief minister and was responsible for the split in the party.

He added that as the national president of the Samajwadi Party, he will decide who the party’s chief ministerial candidate will be for the UP elections.

With the expulsion of Akhilesh Yadav from the Samajwadi Party, the party for all practical purposes has split.

This will have wide-ranging ramifications on the electoral fortunes of all the parties in the state, including the Bharatiya Janata Party, the Bahujan Samaj Party, the Congress, the Samajwadi Party and, of course, the breakaway faction led by Akhilesh Yadav. In all likelihood, Akhilesh will now seek support from the Congress for the impending elections. That is, if the father and the son do not patch up.

When asked if he would take back his son into the party if he apologises, Mulayam was cagey and did not give any clear answer.

On October 23, Ramgopal Yadav was expelled from the party for six years. But weeks after he was reinstated into the party.

The BJP and the BSP will now feel they have a great chance to win the UP polls and lay claim to power in the state.

Earlier, Mulayam had issued a showcause notice to Akhilesh for issuing a separate candidate list for the upcoming UP elections. A showcause notice was also slapped against Ram Gopal Yadav for talking against the party line in the media.

Mulayam had called a meeting of all candidates named by him for the Uttar Pradesh elections on Saturday morning to send the message that they are the party’s official nominees, and that he continues to be the one with the last word in SP.

Cracks in the Samajwadi Party ranks intensified as Akhilesh Yadav released a list of 235 candidates late on Thursday evening, comprising 171 sitting legislators and 64 candidates for constituencies that the SP did not win in the last election.

Will decide who will be UP Chief Minister: Mulayam