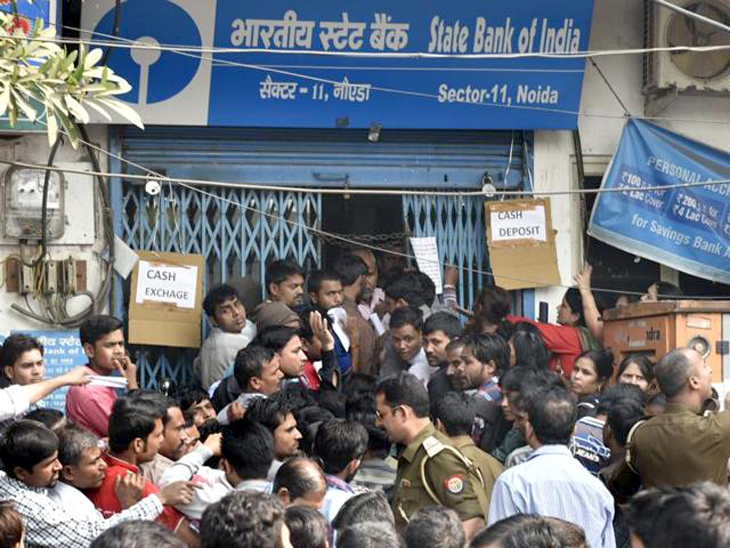 New Delhi, 30 Nov 2016 : As many bank accounts were credited with salaries, more chaos was witnessed on Wednesday outside banks as a large number of salaried people also queued up to withdraw money.

The November 8 demonetisation announcement was followed by a severe cash crunch. The long queues at banks and automated teller machines don’t seem to be getting shorter since Tuesday after crediting of November salaries in many accounts, even as customers and bankers are reporting brawls over the cash shortage.

A visit to different bank branches in both New Delhi and adjoining Noida revealed people hassled after standing in bigger queues to withdraw their salaries. They also expressed resentment over arbitrary limits and rules for withdrawals set by bank officials at their own whims and fancies.

Queues begin to form outside banks just after 7 a.m. and even earlier, as against the opening time of 10 a.m.

As late as 11.30 p.m. on Tuesday, a serpentine queue was in place at an ATM in Sector 12 in Noida. Many banks in Malviya Nagar, Lajpat Nagar and Saket reported no cash.

Around 300-400 people queued up outside the State Bank of India and IndusInd banks in Krishna Nagar area of East Delhi.

The winding queue outside Axis Bank in Saket spilled onto the main road. Even the normally deserted Oriental Bank of Commerce in Saket saw a long queue of customers.

Many people rued having to wait for hours to access banking.

“I waited outside the bank from 9.30 a.m. to 4.30 in the evening. I did not leave the queue even once so as not to miss my turn. I kept ordering tea from a nearby vendor to beat hunger,” griped gardener Chedi Ram, 44. Many banks were refusing to accept old money or give new money to clients operating accounts in other states.

“I have been standing in queue for the past two hours as I have to pay my maid and grocery bills in cash. I somehow managed to convince my landlord to accept the rent in cheque but I am bound to visit the bank for ensuring cash for other payments,” said Vishakha Sharma of Janakpuri in southwest Delhi.

“It is so humiliating we have to stand in long queues and beg for our own money. I am sure tomorrow (December 1) will be worse as maximum people will get salaries in their accounts,” the 27-year-old said.

An MNC employee complained about banks not conforming to rules on withdrawal limit.

Many echoed his resentment. Bankers, on the other hand, maintained if they go by the Reserve Bank of India’s upper limit, they will be able to cater to only a few customers even as queues outside keep getting longer.

Mayur Vihar resident Chirag complained that he was not allowed to deposit Rs 4,000 as he didn’t carry his identity card to the bank.

He had a heated argument with the bank manager, arguing that RBI guidelines said there was no need to carry the identity proof to deposit less than Rs 50,000.

“I can’t deposit the cash as they are asking for a copy of the identity card, which I am not carrying. I also came to withdraw money but they are out of cash,” the 36-year old said.

A Krishna Nagar resident Rahul Chauhan said he received his salary in his bank account on November 29 but was unable to withdraw money. “I stood in the queue at 3 a.m. in the morning (on Wednesday). By the time, my turn came, the bank had run out of cash.”

Surinder Kaur, in her 50s, accused bank officials of helping friends and relatives and the abuse of token system in banks.

“I have been coming to the bank for the past three days. Turn-wise tokens are distributed to women customers. They are told to come around 1 p.m. But when we arrive, bank officials send us back saying there is no cash left,” she said.

“I am feeling frustrated with mismanagement of the banks and the government.”