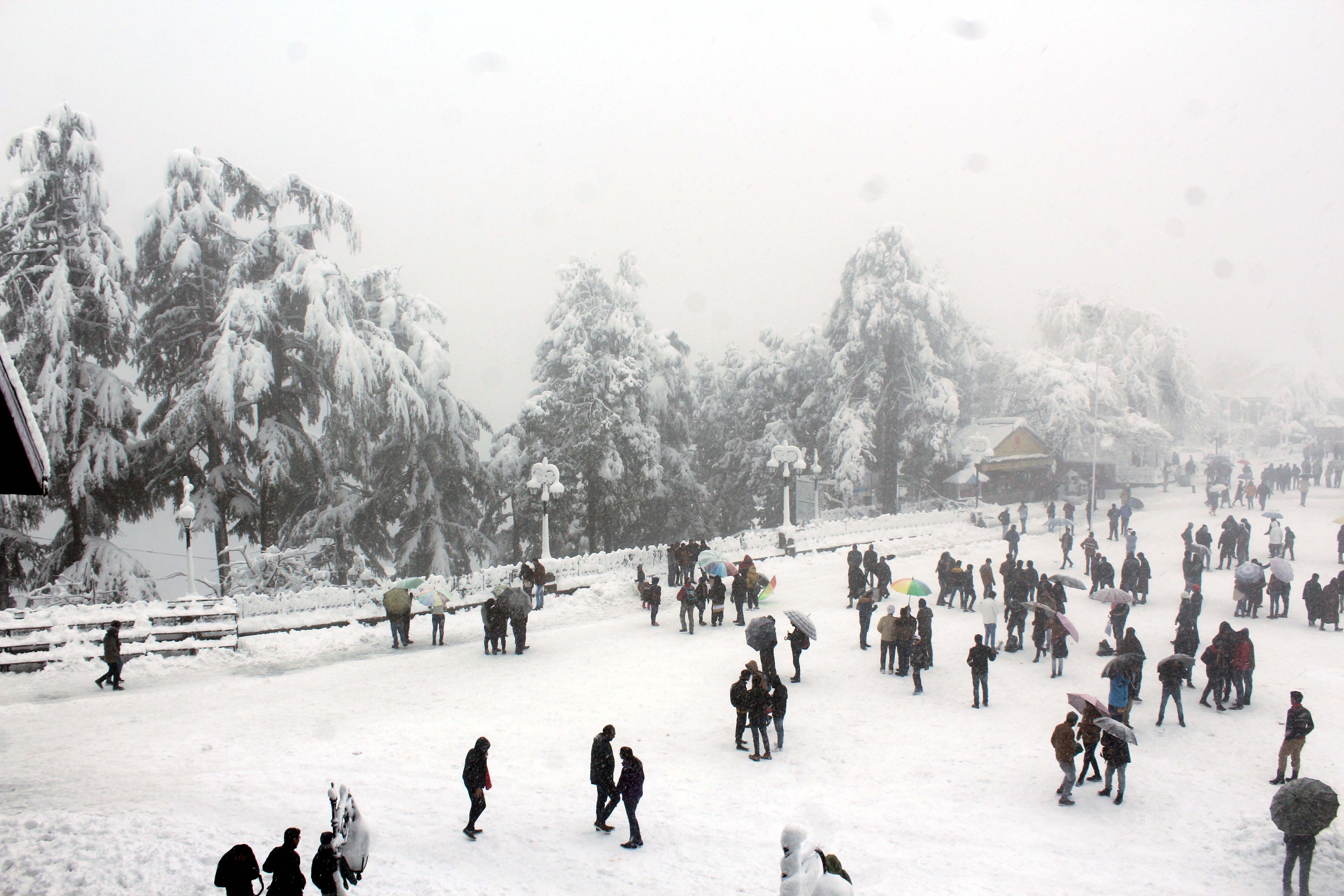 Electricity supply was snapped here and Manali as power lines were damaged badly due to falling trees.

But plentiful snowfall has cheered members of the hospitality industry in the hope that tourists will come in large numbers in the coming days.

Traffic bound for Shimla could only reach Shogi, about 15 km from here, due to snowfall, an official.

Likewise, heavy traffic on the National Highway-21 was blocked near Patlikuhl, 20 km before Manali.

This was the season’s first significant snowfall that froze the “Queen of Hills” and resulted in the freezing of taps.

Director General of Police Somesh Goyal said it was after decades that Shimla received so much of snow.

“Bad thing is no electricity. Who cares! Going out for a walk with camera,” Goyal said on his Facebook account.

This season Shimla last got snow on December 25 and it was mild one. According to the Met office here, certain areas in Shimla like the Mall Road, the Ridge, the US Club and Jakhu hills and Manali got more than a foot of snow.

While Shimla saw a low of minus 0.2 degrees Celsius, it was minus 0.8 degree in Manali.

McLeodganj, the abode of the Dalai Lama in suburbs of Dharamsala town, was also covered with snow.

The Dhauladhar ranges of the Himalayas, forming the backdrop to the Tibetan spiritual leader’s official palace, have been experiencing heavy snow, the Met office here said.

A government spokesperson said most of the internal roads in Shimla, Kullu, Chamba and Kinnaur districts were cut off due to snow.

Even traffic bound for towns in Shimla district such as Narkanda, Jubbal, Kotkhai, Kharapathar and Chopal have been disrupted.

The road link to towns in upper Shimla is likely to be restored by Sunday evening, the official said.

The official advised tourists not to venture into remote areas as chances of heavy snow were high. The weather forecast said western disturbances — storm systems originating from the Caspian Sea in the Central Asia and moving across the Afghanistan-Pakistan region — would remain active till Sunday with chances of heavy snow at isolated places.

Thereafter the weather will remain largely dry in the state till January 13, Manmohan Singh, director of the meteorological office here, told IANS.

He said the minimum temperature in the state would drop in the next two-three days.

“It was sunny yesterday (on Friday) and we were never expecting sudden change in weather. Today we really enjoyed hurling snowballs at each other,” said Neha Gandhi, a tourist from Delhi who was in Shimla along with her parents.

“We hope to get a good number of guests in the next few days,” said D.P. Bhatia, liaison officer with the Oberoi Group’s hotel here.