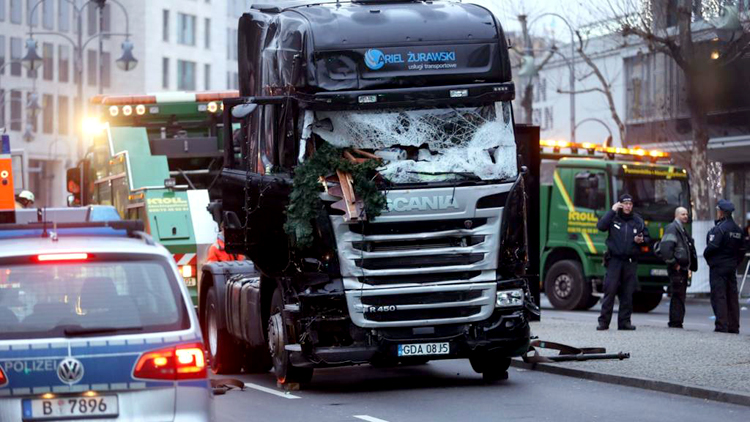 Berlin, 20 Dec 2016 : German police on Tuesday said they were probing a “suspected terrorist attack” after a man ploughed a lorry into a Christmas market in Berlin that left 12 dead.

Shortly after the attack at Breitscheidplatz on Monday night, Berlin police arrested the suspected attacker who was reportedly from Pakistan and entered the country in February this year, the Guardian reported.

The 23-year-old Naved B has been registered at the refugee centre at the disused Tempelhof airport and held several identities, police said. He was known to the police for minor crimes but not terror links.

“All police measures related to the suspected terrorist attack are progressing at full steam and with the necessary diligence,” Berlin Police said.

At least 48 people were injured, some seriously, in the attack after the vehicle mounted a pavement at about 40 mph (65 kmph) and crashed into them. The carnage came just hours after the Russian ambassador to Turkey was shot dead in Ankara by a policeman who claimed to be taking revenge for Moscow’s involvement in the battle for Aleppo.

It followed warnings from intelligence agencies that the Islamic State militants may target Christmas markets in Europe.

Witnesses in Berlin described scenes of panic and horror as the lorry veered off the street and ploughed into the crowded Christmas market just off the famous shopping street of KurfÃ¼rstendamm at around 8 p.m.

Jan Hollitzer, 36, heard screams as the vehicle made its way through the stalls.

A journalist said he saw destroyed stalls, broken glass, crockery and tables and injured people lying on the ground. “There were people under the truck and it was really scary, really terrifying.”

German Chancellor Angela Merkel expressed sympathy for the victims. “We must assume it was a terrorist attack,” she said. “This unspeakable event will be as severely punished.”

Germany was put on high alert for a major terror attack in the months after Merkel opened its borders to more than one million refugees from the Middle East.

The incident echoed an attack in Nice, France, in July where 86 people were killed by a truck driven by a man inspired by the Islamic State. The latest attack site is near a famous Berlin landmark — the Gedaechtniskirche, or memorial church, built in 1891-95. The market at Kaiser Wilhelm Memorial Church has existed for 33 years.

US President-elect Donald Trump blamed “Islamist terrorists” for the “slaughter” of Christians. “Today there were terror attacks in Turkey, Switzerland and Germany – and it is only getting worse. The civilized world must change thinking!”