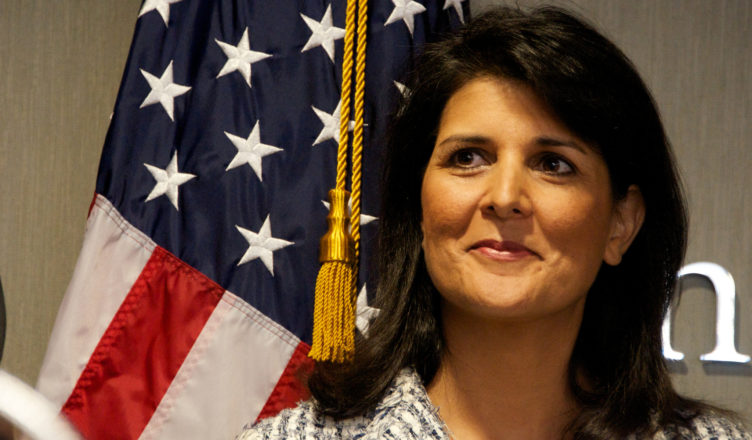 New York, 23 Nov 2016 :  President-elect Donald Trump announced on Wednesday that he will appoint Nikki Haley, “a great leader” to be the United States ambassador to the United Nations, a cabinet-rank position, marking a historic breakthrough for Indian Americans in politics.

Announcing the appointment, Trump said, “She will be a great leader representing us on the world stage.”

As the Permanent Representative to the UN, Haley will be the first woman and non-white appointed to a high-level post in Trump’s incoming administration.

In the US, the UN ambassadorship carries a cabinet rank, although the Permanent Representative does not figure in the line of succession to the presidency, where the Secretary of State takes precedence.

“Governor Haley has a proven track record of bringing people together regardless of background or party affiliation to move critical policies forward for the betterment of her state and our country,” he added. “She is also a proven dealmaker, and we look to be making plenty of deals.”

Accepting the position, Haley said, “Our country faces enormous challenges here at home and internationally, and I am honoured that the President-elect has asked me to join his team and serve the country we love as the next Ambassador to the United Nations.”

Her appointment caps a year of political achievements for Indian Americans.

Her full name is Nimrata Nikki Randhwa Haley and she is the daughter of Sikh immigrants from Amritsar.

While Haley does not have direct foreign policy experience, she has travelled to India and Europe for developing businesses in her state. She also has well-honed diplomatic skills having manoeuvered her way through the politics of South Carolina, a conservative state, where she was opposed by a section of her own party.

Trump alluded to this when he made the announcement calling her “a proven deal-maker.”.

Indian Americans made significant political headway this year in the US.

For the first time an Indian American, Kamala Harris, was elected to the Senate, and the House of Representatives now has four from the community with the election of Pramila Jayapal, Raja Krishnamoorthi and Ro Khanna, who will join the re-elected Ami Bera.

The first Hindu elected to Congress, Tulsi Gabbard, a Democrat from Hawaii, is also under consideration for a job in the Trump administration. A military veteran of Afghanistan, she has been critical of US military entanglements abroad, while taking a strong position against terrorism, which aligns her with Trump’s state policies.

Gabbard was invited by Trump to meet with him earlier this week and discussed the Syrian situation, terrorism and the department that deals with ex-service people.

By appointing Haley, Trump is reaching out the centrist sections of the Republican Party that had been critical of him.

Haley had vehemently criticised Trump during his campaign for the Republican nomination, going to the extent of saying that he was everything she didn’t want to see in a president. When she gave her party’s response to President Barack Obama’s State of the Union Address, she made an indirect criticism of Trump for fomenting a politics of anger.

However, Haley endorsed Trump after his nomination as the party candidate. Last Thursday, she was in the first batch of potential candidates for positions in the Trump administration who were interviewed by him for possible positions.

Haley broke a glass ceiling in 2010 when she was elected governor becoming the first woman and first non-white to win the job in the southern state, which has had a reputation for racism and social conservatism.

She had to overcome a gutter campaign of personal attacks from her opponents who even accused her of adultery. But she prevailed, getting the trust of the voters.

Although most Indian Americans – about 65 percent – support the Democratic Party, members of the community have achieved breakthroughs in the Republican Party, which is called racist and anti-immigrant by its opponents.

After a gap of 48 years since the election of the first Indian American to Congress, Dalip Singh Saund in 1956, Republican Piyush Bobby Jindal broke the dry patch when he was elected to the House of Representative in 2004. He was then elected governor of Louisiana in 2007 and served two terms. He unsuccessfully ran against Trump for the party nomination.